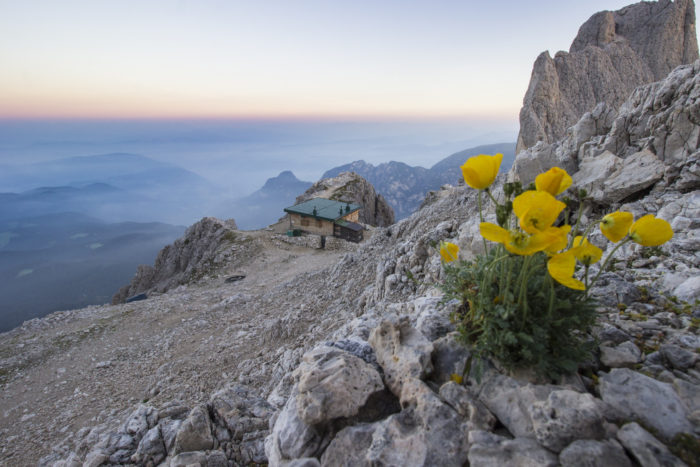 The Santnerpass refuge is situated on the western flank of the Rosengarten group at a proud height of 2734 metres. The hut was built in 1956 by the mountain guide Giulio Gabrielli from Predazzo and managed by him in the following years. Since 2013 the hut has remained closed to passing hikers and climbers. In 2018, however, Michel and Romina decided to take over the hut and to beathe new life into it. The hut has been under reconstruction since spring 2022 and will open its doors in the first part of the new structure this summer.

At asunset, the scenery turns up in fiery red, lighting to purple before fading into the starlit sky: this is defined to be the Enrosadira, also known as the Alpenglow. This scenic phenomenon has paved the way for King Laurin’s mythology, who cursed his blooming rose garden after the battle between the intruders and the dwarfish original inhabitans. His rose garden is situated exactly where the Santnerpass hut is situated today. The unique location allows you to fully immerse yourself in the UNESCO Dolomites, the ideal starting point for several climbing routes, via ferratas or simply relaxing moments on top of the world’s most spectacular sceneries.