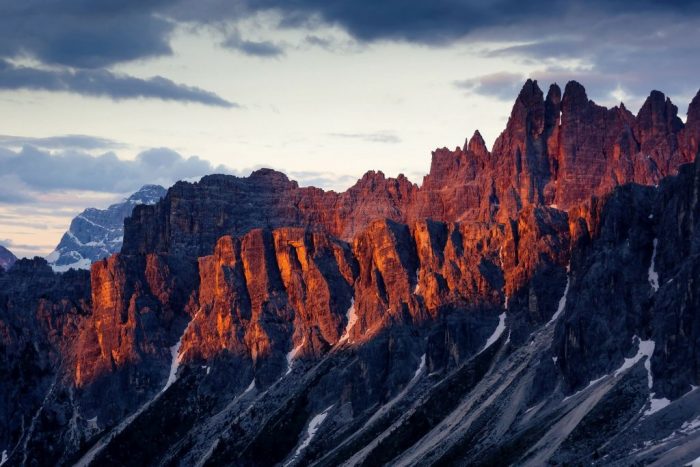 According to the saga, it was right here at the Rosengarten, were the realm of King Laurin and his hardworking dwarf clan was located. They mined for crystals, silver and gold inside the mountains.One day the king at the Adige river wanted to marry his beautiful daughter Similde. All the aristocrats in the area were invited to a May trip, but not King Laurin. However, he decided to take part as an invisible guest equipped with his magic hood. When he saw Similde at the tournament site, he immediatly fell in love with her, put her on his horse and rode away with her.

Soon Similde’s promised man and his knights moved out to rescue the princess and stood in front of the rose garden shortly afterwards. King Laurin wrapped his miracle belt around him, which gave him the strength of 12 men and faced the fight, but soon he realised that there were too many opponents. So he put on his magic hood and tried to hide in the rose garden, invisible as he thought he was. But because of the movement of the flowers, the knights recognised where King Laurin hid himself, grabbed him, broke his magic belt and capured him.

The furious King Laurin turned around and cursed his rose garden, that he thought had betrayed him: neither by day nor by night a human eye should ever see again the magnificence of the roses. But Laurin had forgotten twilight between day and night in his curse and so it comes that the enchanted garden still lets its blossoming roses shine for a short time, when the pale mountains are illuminated with a blaze of red light before sun set.