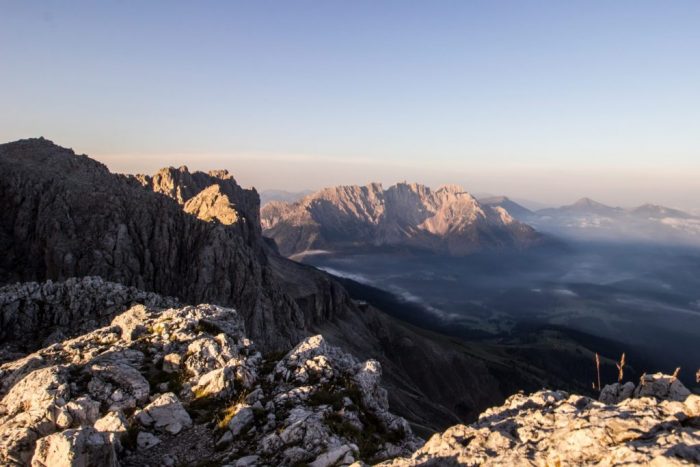 Basically, there are two ways to reach the Santnerpass hut: one of the ways leads over the Santnerpass via ferrata, the second option allows the hike up from the Fassa Valley via the Vajolet- and Gartlhütte to our refuge.

From the Frommer Alm (1,743 m) you can take the König-Laurin chairlift to the Kölner hut (Rifugio Fronza alla Coronella, 2,339 m). Alternatively, you can also hike this section (walking time: 1:15h). From the Kölner hut you ascend eastwards (path no. 550) over an 80m high rocky outcrop, until you reach a boulder plateau. There, the path forks and you follow the left turn-off (path no. 542) to the Santnerpass via ferrata. The entrance to the via ferrata is at the foot of the Rosengarten group at the southwest wall. The via ferrata, which is one of the absolute Dolomite classics, has short climbing passages of grade I difficulty. The prerequisites here are climbing equipment including helmet – saftey comes first! Furthermore, you need to be surefooted, free from fear of heights and dizziness. Look out for the marked points so that you don’t risk ending up in the wrong crack. Finally, the Santnerpass hut is located directly at the exit of the via ferrata.

Across the Val di Fassa

From the village of Vigo di Fassa (1,440 m), take the Vigo-Catinaccio train to reach the Rifugio Ciampedie. Alternatively, from the village of Pera di Fassa (1,300 m) you can take the Vajolet chairlift up to the Vajolet valley. Both possibilities lead further over the Rifugio Gardeccia, the Vajolet and the Preusshütte, to the Gartlhütte. The ascent to the Gartl hut is covered by supportive steel cables that help you to reach the so called ‘Gartl’, where the last 200m directly lead to the Santnerpass hut.

Across the Laurin wall

This journey to the Santnerpass hut is the most sporty and at the same time the most demanding ascent. The alpine climbing route “Similde” runs straight over the Laurinswand. The climbing route provides nine pitches that directly lead to the west wall and end straight at the terrace of the Santnerpass hut. The route was opened in 2008 and is equipped with normal hooks (also at the stands). Here, the climbers will find grippy rock in the VIII difficulty range. The access starts from the Kölnerhütte (walking time: 45min).

Arrival by car or bus

The two starting points, the panoramic road to the Rosengarten and the other one to the Fassa Valley are well connected. You can either travel by car over the Niger Pass to the Frommer Alm or take the bus (line 185) from Bolzano. The Fassa Valley is also quick and easy to reach. In the village of Vigo di Fassa you will find a large number of parking spaces, as well as a bus stop in the immediate vicinity of the cable car.